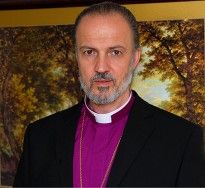 The Archbishop, †The Most Reverend Dr. Costakis Evangelou MBE has a wide and a diverse experience in ministry. He was born in Cyprus and has 4 wonderful children, Phodis, Andreas, Christopher and Marisa, who themselves have counted the cost as their father works tirelessly in the vineyard of God.
He holds the Bachelor of Divinity, and PGCE, Post Graduate Certificate in Education, which were obtained in the University of London. He also holds a Doctorate in Divinity which was obtained through the International Theological Seminary based in Florida, USA.
He began his ministerial life as a cleric in the Eastern Church and has done much pioneering work and helped a great many lives discover their own relationship with God and see and fulfil their God-given potential. He is involved in various church councils, mission work and was instrumental in the funding and building of a medical clinic in Eastern Region of Ghana, and a dormitory for an orphanage housing children suffering from the HIV virus in Ssanga, in the southern part of Uganda.
Archbishop Evangelou is regarded by many as an authority on the Greek New Testament and he has produced his unique method of teaching the New Testament on DVD entitled “its all Greek to me!” which gives access and understanding of the New Testament in the original Greek Language through an eight step programme.
He is held in the up-most respect by all with whom he works and who share the vision of the Lord, to the point of being given a seat and district in Obomofodensua, Ghana, West Africa.
He continues, as a Archbishop and through the council to fulfil the great commission of our Lord and Saviour Jesus Christ and to ordain those willing vessels to become true shepherds of the flock of God. All this has been established through great labour and sacrifice but at no point did he ever flinch or deter from the God-given vision.
Copyright © 2020 Ixthus Church Council All rights reserved

Write your address and your e-mail here

Select a course first to display its contents.

No available contents for

There are no free, paid or coming soon courses in your school yet.
Why don't you create one?

The school owner is working hard preparing the courses for you.

Oops, you haven't created any courses yet.

Wouldn't it be a good idea to create a course?

No blog posts found in your blog. Why don't you create one?